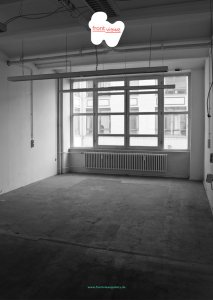 - The deafness of eyes, the dullness of sound, the brashness of impossibility to classify anything, to relate to anything. (calm down).
There they were again, those things, like ever resisting, independent from so much, especially from the events of the day, pointing happily on themselves and their brood: nevertheless different, completely new fresh formed und therefore within the Here and Now. -

The missing of an author

Time is ticking and realities are changing.  Reactions configure themselves in a new way. The culture medium has changed its quality, therefore ways of creative shaping are refined or new methods are invented.
The art of abstraction is the filtering of selective parts of individual or collective realities: some patterns persist, some shapes stay. In this case the human mind works like a filter, served by an endless number of technical proceedings. Within the shaping of reducing, filtering process a certain core becomes evident. A lot of what refers to something special, documents something exactly, is specific for history is getting wiped, washed away and blurred. Thereby the works are falling of time, they are more general.
Including such a great palette of open pointers, the link to the surrounding world becomes less important, instead the viewer is lead to perception of a more »introspective« opponent. As these works are stepping of time as a self related objects, they become reality. Therefore they cannot be completely independent, because everything has been materialized, cannot exist outside of space, time and material. In this meaning associations to things already existing are essential. Even the most radical try of a »breakthrough« in art has always been »grounded« until now. Nevertheless the source of the artworks, the similarity to already existing things are not so obvious, they resonate more casual, diffused to experience and interpretable in many ways.
Maybe it is possible to differ two basic ways to deduce a form from reality. On one hand there would be strategies using a subtractive method in a classical understanding, means to reduce things already existing to bare the core. On the other hand would be routes following rather an additive principle to generate something, which offers a formal presence but denying every direct figurative or representing hint.
But these are rather guidelines of processes, leading into abstraction. In counterpart with the real artworks this theoretical antagonism is often hard to assign and may not be so important anymore. It is more obvious, that these themes are verbally hard to tell, against what the works by themselves materialize the centre of the phenomenon directly and make an appearance much easier possible. That’s exactly what the exhibition wants to achieve. It shall offer a small insight-view about actual and exciting positions on this field of art. The merged works are from our actual time, but they also point beyond our daily understanding and experience of time.

Abstractions are challenging. A minimum of form demands a maximum of intellectual cooperation. This demand can sometimes become unrelenting when our path to reification—and therewith to our environment—seems obstructed: logic, mathematics, or theoretical physics intend to describe a world which can never be more concrete than a formula.
Abstractions can also provoke. When the return to minimal design meets the expectation of a clearcut legibility, that is to say when meaning is no longer given, but rather called for, this demand can be misconceived as a transgression. This applies especially to visual arts. With his “Black Square on White Ground” (1913), Kasimir Malewitsch not only put a lid on the history of representational painting but also placed a screen over visual meaning. If every image prompts us to see something as something, then the “Black Square” has the effect of an impertinent self-nullification that merely wants to convey "Nothing to be seen here". For this reason abstract art can act as a mockery of the viewer, who must always ask himself what exactly it is that he is looking at, but who of course knows that the answer will always come up short.
Yet the much greater mockery of the viewer takes place from morning to evening on the image-flooded channels of our monitors and in our newspapers, in the numerous ad spaces of  every subway and city plaza, in short: everyplace we refer to as "public domain". Images rule here in absolute concretion and with a directness as if poured in cement, and they tell us: “I will show you the world". We take a leap of faith with our addiction to reality, even though we know of the obscene lies in all these images. It’s all too tempting.
Abstractions, as brought together in “Aus der Zeit”, show a much more fragile truth. Their relation to the world is not based on a representation of the putative real. They show, rather, what the view can look like in a world where all must be image. Out of the visual testimony that our present has in store are forged here the collected works of art Abstraktionen, which are not mere images, but which show the logic of the visual. We see not only everything that images can be, but also how we see. That which we still recognize in the most abstract of forms is a mirror of our visual thought. The works of art in this exhibition are caught in our time. Yet, because in their abstraction they always hold every presence at a distance, they are, in full ambivalence: Aus der Zeit.