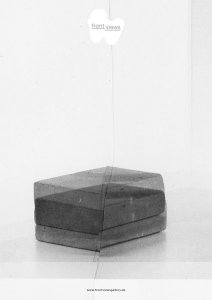 „It is due to art’s poetic nature that, in the midst of what is, art breaks open an open place, in whose openness everything is other than usual.“


An increased presence of form and use of unusual materials - this is what unites the positions shown in «Riss» – (Disruption). The artistic strategies, origins, and technical resources all differ. What unites them is their reflection on
structure,
history,
process.
With different emphases on dialectical structures, historical facts, or the autonomous potential of materials, the works reveal volatile positions that hold out creative processes, moments of creation or their own materialized temporality to the viewer: formations of a disparate structure, shaping of history, and the manifestations of chemical processes fill the room.

The image and form material of Astali/Peirce is taken from various sources. opaqueness in Access and State set the rhythm of their works and fades them out at the same time. The artist duo deliberately deconstructs each definite reference or any clear recognition of an original impulse. They also establish an alienating materiality that leads through the assemblage character into a distanced temporality. In the work of Astali/Peirce, the possibilities of a partial break, whether it be a crack, a controlled cut, or a fold, fuse with the varieties of the variation, the willed deviation, the practically mathematically psychic and physical derivation.

The approach of Amir Fattal chronologically and formally lies in the social and architectonic power structures of the Third Reich. His works develop their visual selection and material execution from a methodic “deep drilling” into a period of time. As such, breaks in history can lead to durable connotations that, like newly grown bones, are particularly resilient. Works that first arise 70 years later can base their existence on this break, this impulse from the past. The trauma is then re-exposed, what happened is transformed, newly manifested in the present. Fattal’s current series analyzes the collaboration of absolutist regimes and their indoctrinating aesthetic, detecting the historical breaks and their consequences on specific protagonists of history. Fattal’s creative actions occur under a historical pressure that must be assumed but which is largely ignored by society; like the pressure of the "Schwerbelastungskörper" on the Tempelhof ground. From shedding these layers of Nazi Germany to today, he stimulates the things and “newly” compresses them. It is not surprising that his pictorial “core” are “Denkmale", that demand memory, enlightenment, and reflection. In the form and function of various known monuments in the city, they bring the one german “-male,” that is, the sign of sin and shame, back to contemporary thinking.

With Nikola Ukic, continuity takes place in a procedural expansion of the materials, drawing on the possibilities of his favorite material polyurethane. In “Becoming-ness,” is contemporary in the process as well as the final status. This results in a gradual breaking, as if it also carried the end of the expansion to its reversal. Finding a border, the solidification of a defined form, doesn’t simply mean the acceptance of the nature of the materials and thus the acceptance of our reality, but rather one of uncovering suggestive possibilities beyond the immediate state of form. By combining the relics together, the juxtaposition of order and chance procedures—is it a spirited “external” cut or simply a tear? Like abandoned shells or stripped skin, his sculptures and objects are witnesses, monuments of death, and a possible birth in material, the pictorial potential of transgression. Ukic explicitly confronts works of past generations of sculptors, especially the expressive-abstract modernism of, for instance, Hans Arp and Henry Moore. The original impulse lies in further development and overcoming by means of a radicalized attention to the inherent possibilities of the material for an amorphous formation of shape.

A heightened presence of form unites the shown positions in «Riss» – (Disruption). Two dualisms are intended to illustrate what is thereby meant: the first dualism establishes the relationship between original impulses and complete forms. What is the intention, motivation, and approach of the artist and how does a work come to be from this? Depending on the position, this process varies in conceptualization, materiality, and form. Finally, the works offer the viewer a confrontation and are genuine impulses that have become form. The perceptible traces of this formation are partly visible and partly hidden. And although the viewer can only partially draw conclusions about the stages of becoming, a specific presence of the object is still always present. The second dualism that pervades the works is an interplay between continuity and break—both in the conceptual structure, form and materials—similar to a four-dimensional net. Time and content are experienced and newly conceived materially in space.