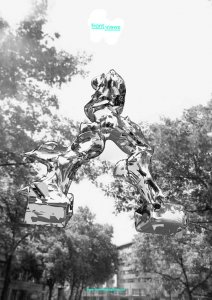 “To operate, to materialize, to realise, to produce; it seems that this ought to be the perfect destination for every thing: to transform by a progress- and inner necessity driven movement from the status of the possible to the status of the real”*

Frontviews would like to investigate the possible connection of Jean Baudrillards argumentation in “The Intelligence of Evil or the Lucidity Pact” on phenomena and tendencies of contemporary art. In this book Baudrillard introduces a new status for the actual anthropological development. He calls that status “Integral Reality”. Following his argumentation, there was a time when belief, idea and imagination were clearly divided from materialistic, physical world. Of course certain ideas, certain utopias, certain inventions may have crossed the border and became “real”, but in that moment it was obvious, that they changed their status: From the realm of imagination into the world of reality. In his book Baudrillard attests already in 2004 the end of this old balanced duality between “imagination” and “reality”, because the dominance of “reality” is strongly forced today. This shift is proven by Baudrillard quoting a couple of actual developments like the exponential expansion of industrial production, of service, of data, of mass media and not at least of code based virtuality in our daily life. There is this big need of our actual society to produce more and more “reality”, no matter in which media, expansion, condition or status. Baudrillard calls this emerging social suction “Integral Reality” and he leaves no doubt, that this will have a massive impact on us.

Set in the laboratory-like rooms of Studiogalerie Haus am Lützowplatz, frontviews will investigate if and how these thesis of Baudrillard will eventually have an effect on contemporary art. Therefore Stephan Koehler conceived some positions to a reduced selection, which – except from one significant counterpart – are adapting the principles of “Integral Reality” seemingly effortless and even potentize them. These are works, which fluctuate in between media and status without any noteworthy resistance. Just being imagination one second ago, are they already codices of cyphers floating through media just to concretize themselves here or there as single image, as operation, as a row of animated images or as object. In all these forms they are – following Baudrillad – already “made real” or “realized” and they are overwhelming us with the enormous diffusivity of their spectrum and adaptability. Supported by a structured text work and by discussions on the single work, the exhibition will try to fathom the phenomenon and scrutinize the predictions of Baudrillard at the same time.