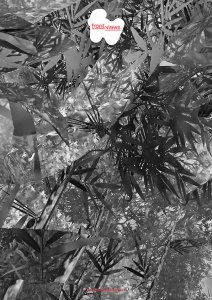 Somewhere in 2013 my website was hacked and used as a relay for distributing spam mails. As a reaction to this, I decided to stop publishing for at least one year.

Online content, like every other published content, seems to be public property for knowledge holders of technology of appropriation. Once you get access, the appropriation of authorship is only a matter of hiding traces.

To create a particular opinion - or pattern, any data can be recontextualized with any other data. In this sense, algorithms can be defined as operations with open ends. The input and output can be restricted to a certain format, but there is no restriction how the output is used - or not.

Today, meta processes that observe child processes for unusual patterns are used to prevent the Halting problem. The modern computer can be seen as the set of all sets that are not members of themselves. The user must be seen as a necessary member to complete the set - in contradiction of its own definition.

However if a process produces data that is somehow used by other processes, the context gets much more complex. Interrelation is only readable if the pairing nodes are known (see above: this is where the hiding starts).

Among the fastest algorithms today are indexing, sorting and searching methods. A huge industry exists only to determine the distinction of referenced and unreferenced data. However, "reference" is a misleading term, because data is always the representation of digital memory.

In this sense, talking about technology reveals the tautology of a meta language that is used to describe the supposed meaning of data, which can be anything but unreferenced.

Therefore the product of the future will be the "Verdacht" (under suspicion) machine. An automation that is able to indicate where a distinction might be necessary - or not. According to the Laws Of Form suspicion will be the pre indicator for the distinction of what we know and what we don't know. The fetish of commodity becomes the fetish of distinguishability, that is always, and can only be indistinguishable memory.
(Frank Eickhoff, Berlin, 2014)

Baby! So I was thinking the text for Frank' s piece should be about how more data and more information of our environment through technology allows us to see more. And that "see more"Â may develop to a deeper understanding of nature as a system of relationships.

I explain Franks work to you first. I would call it a movie game installation. TV screens are mounted on a vertical construction like a chessboard and behind it there are 5 computers connected to each other. They form a network and render the animation on the screen through a game engine. You watch how an auto-player from an ego shooter perspective finds its way through the jungle. Each scene is randomly created and unique. In this case the network and data exist only by itself and for itself, like nature somehow. The empty spaces are a reminder of the invisible and unused data that "big data"Â produces.

It made me think about the relationship of data and power. About whether the big data thing (and what is to come) must necessarily turn out to be a scary big brother control scenario or can keep some kind of anarchic state like in the early days of the internet in order to keep pushing to elevate us towards our full potential of being and resonating more towards the Universal Code. Frank said that his cousins use Facebook with multiple fake profiles and make fun of the platform. They don' t care. Bless them. I hope they follow the hippy side of life;-)

>> I actually liked the video. I was watching it and my autistic friend was putting his dinosaur up to it, as if it were the perfect setting for it, he was into it. I thought it was a lovely coincidence because through my own child' s eye it reminds me of a dinosaur game puzzle that I always wished hard to get absorbed into and lost in without the slightest worry of how to survive. In fact now that I recall, I don' t even think I thought of myself entering that scene as a human.

The suspicion remains, as Frank puts it, that with the production of more data and depending on the usage of algorithms the more we also produce non-used data. In a western binary thinking we would call it "Trash!" But who is to define trash! And what is going to happen with all those data? The suspicion is, that what we mold as culture is what our selective consciousness and what our often ignorant view produces. The suspicion is hence that there is just more out there.

>> This reminds me of the Chinese artist, Wang Zhiyuan' s piece, a huge mans underware with electronic junk, (cables, tv' s, camera' s, radios) hanging out of the crotch and a led light legend on the top that loops phrases selected randomly from the local internet-I send you the photo of this-my favorite piece of his actually.

>>> Haha. Id love to see that photo of this hybrid sex piece!

And then I want to talk about the virtual jungle. The idea of the jungle as fundamental nature (the untouched wildness) realized in its non-natural virtualization. How the virtual jungle works, we know: there is an auto-generative algorithm processing data through a system of networked computers, which creates this jungle on the screen. How the jungle works, only the native people may be able to tell you, a thick dense system of millions of organisms. Now tell me, which one is more "real"? The Internet starts to feel more like a sea of data or simply like a jungle. Therefore I like the extreme quantification of data. The jungle on the screen makes me want to bond more with nature relating back to the universal code.

>> The universal code calls for communicating with ourselves through nature. And not to nature as an object but as a living being that lives through us and us through nature. As if there were no boundaries of self. Same thing for the one we have termed the "other"Â including machines, we could as well live them as ourselves. Native science is an art of communication. Even in this "modern age"Â Indigenous people communicate with machines not as objects but as beings. They honor the relationship with machines, being grateful to their inventors and where the materials that compose them come from. Shamans change the cultural code of the people to heal them. For common welfare or their own ego, the programmer creates a series of options in this function. Writing an algorithm, the programmer is negotiating with the computer "in order to solve a problem"Â.

>>> Yes, interesting. There seem to be parallels. Only that in order to become a shaman you run through an entirely different process of acquiring knowledge. And you use this asset for a different purpose. That' s key.

Before the Internet, people relied on observation and statistics to produce knowledge. Then big data came. Suddenly you see so much more. You observe not only the path but catch relational orchestral threads of relationships. You can still choose to observe them, but you can also engage in deeper ways with them. Before the Internet we counted how many times we kissed or fucked someone. Curiously enough, we collected the sum of the number of people, not the lot of joyful fucks. So telling about the state of art of human relationships. Now with the Internet we are surfing a constant wave. The ride becomes more important than numbers. We start to relate differently to each other. With access to the rich net of big data in nature and by plugging ourselves in, we may live so much more abundant.

The work rather contrasts the abundance in the jungle (cycles of regenerative energy) with the affluence of modern society (surplus of non-regenerative energy resources). We feel the violence from 200 years of energy surplus. It' s likely a law of second nature. More energy = more social growth, more social power.

>> We are all imbedded in a network but how can it be more abundant?

>>> I understand abundance as the natural phenomena arising from a balanced system. I have that term from you actually. When we were at the Mexico City witch market I got a sack of seeds. You told me it calls on abundance. Abundance is the sum of love and harvest within a healthy system of relationships. So contrary to industrial exploitation, energy is circulated and not extracted and distributed by irrational logic. Abundance is hence different from affluence, which is based on the accumulation of things.

>>> The difference between abundance and affluence is like,our separation from nature. Because it is a separation that starts from within us, manifested into what we term "material objects"Â. Even female nature often a subject of domination as if it were the object of men reveals the inner separation of man. Yet, what does this all tell about human beings? Perhaps that we are disconnected from ourselves and that we have grown full of fears, is a possibility.

Frank' s installation suggests to me to let the game freewheel. Let energy circle. Let nature do its thing. Let data circle. We need to remember how to communicate to nature. Let nature communicate with us again.

We need an art of communication in order to navigate the entire picture of being.

Text by Anja and the Alien.