»Statics And The Movement In Between« 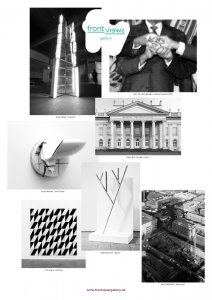 Statics And The Movement In Between

‘Statics and the movement in between’ could be a classical characterisation of the ‘city’ condtion. However when describing the classical ideas of a gallery one would have to say:

Version 1 : ‘statics and the statics in between’

Version 1.1: ‘concrete statics and various statics in between’

This is because nothing moves in a traditional gallery any more, neither the architecture nor the artworks: at best, it is the viewer and gallerist that display evidence of movement. Which leads to the next conclusion:

Version 1.2. ‘Concrete statics and various statics in between, disturbed for seven hours each day by the diverse movements of external subjects.’

This is an appropriate description of the situation this exhibition addresses. It takes us through aspects of the ‘gallery space’ to aspects of the ‘city space.’ At the same time, it is clear that the gallery is part of the city. It is the tracing of connections between both spheres, which make the title and approach of this exhibition ingenious.

The gallery space during an exhibition is a space with different rules; it is ‘special space,’  ‘another room,’ a small version of the big ‘heterotopia’ (1) of the museum. This is characterized by an absence of, or processes in ‘time.‘ Not only is the shell built and defined as concrete architecture, the works presented inside are also completed, and in their final state they become end results placed on the ground or on the wall. Even the projected, moving pictures of a film are based on a closed row of single stills, all mounted and left in specific order by the artist. In fact, except for a few special cases, there will be no process or activity generated by the artworks themselves. When gallery space and exhibition are put together, they are like two shapes mutually languishing in a temporal state of inactivity. But this ‘temporary finalisation’ exists only in relation to the meaning of material and conceptual matters from the artist’s and gallerist’s standpoints, which could be said for many exhibitions. The more important ‘movement’ takes place in the engagement of the works, the way they are combined and what they are representing. One can call it a physical and reflective investigation of a specific setting.

What is key to this exhibition is the understanding of works and their presentation as a reflection of a ‘meta-layer’ to that system called ‘city’. In this sense all works are readable in the thematic opponents of built structures and the interaction of the inhabitants. Continuing this dualism, some artistic positions  represent the static localisation: like the structured, analytic and large scale photographs of Hans Wischut or the formal associative sculptures of Gabriel Braun. Others participants, like Konrad Mühe or Niklas Goldbach, are dealing more with the action by showing rhythmic or oppressed movements in the conserving media of video. In other cases the actual conditon of the object makes evident the action occured in the past, as in Stella Geppert’s ‘crash- sculptures’

In conclusion the art works are combined as a fixed group of objects, defining their proper statics. They are awaiting reference, untill the door is opened and the visitors deliver the movement; not only with their bodies, but also with the thoughts in their head.

Phase One
Without having read curator’s Stephan Köhler’s exhibition statement, I venture onto the terrain of the exhibition. Taking up the offer of the curator, I start off in the smallest room, following the exhibition’s numbering system. The title begins to quickly take on something distinctly formulistic as I view Sinta Werner’s and Markus Wueste‘s work: their ‚tree-cut technique‘is effective in its presentation of the washbasin, and the In Between doesn’t show the surgically tidy, exposed rings of a tree and its life history – but rather, by means of a newly uncovered fold, reveals a type of dangerousness inherent to every washbasin of this world. Through the eye-catching complete and total unreality so apparent to the viewer, the work sets a nice marker for the exhibition. My discomfort grazes Niklas Goldbach’s installation and is momentarily banished by Konrad Mühe’s work. In viewing Mühe’s work, I think back to Werner’s and Wueste’s In Between, which remains as detached from Statics and the Movement as from a ‚birth on‘ lifeless, aggregate state. The latter work appears able to exist and to bracket out the limits of static and movement with a certain post-apocalyptic charm. Conversely,  Mühe fabricates the framing criteria for the exhibition statement: with its mixture of forces of gravity and weightlessness, his figure and its stoic, looped movement carry me away to the mezzanine floor out of Being John Malkovich. A spark leaps over me towards Goldbach’s installation, and the work, a freeze- frame that renders still a single movement, allows the forces of gravity and weightlessness (bracketed out by Müller) to induce a standstill of time, to fossilize a moment. 1 With considerable expectation, I gladly leave that series of somewhat anguishing associations behind me, and venture into the largest of the three rooms. Glancing to the right and to the left, I look for something to bind me in, a kind of connectivity; ultimately,  however, I can’t seem to find an in-point into the room. Amir Fattal’s sculpture duo doesn’t seem capable of finding its niche amidst the associative worlds created in the two smaller rooms, and even the putative friction created by the forces of gravity is better off being quickly dropped. I proceed from here via a swaying and dipping gang- way (mysense of physical reality starts to return as the previous chain of associations start to pale) towards the end of the room. Here, I’m prevented from completely dropping out of the ‚otherspace‘ [‚Andersort‘] by the work of Martha Kolendo and Aram Tanis, although Tanis’ work takes up a role as a framing device – but not as success- fully works as a kind of spatial truncation, linking the associated mezzanine with the upper and lower floors, as I approach the work of Wilschut in the second room. Kolendo’s fading veneer continues to evoke the post-apocalyptic mood a touch, though it can’t quite follow backwith its own Movement the tracks left by the two smaller rooms into the In Between.

Phase Two
After the first stroll through, I seek out those explanations, which must have hit her to eluded me due to my own associations, in the exhibition statement written by curator Stephan Köhler. The arranger gropes his way via a discussion of his own discovery and creative process to the markers placed below his titles – though it must be said that he also places these works in their spatial context, in the context of the city that encompasses the exhibition space. More precisely put, the curator won’t rule out an interaction between what’s outside and what’s inside. In my interpretation, there aren’t any correspondences between the “privileged, special place“ and its hinterland, because another world exists in Köhler’s exhibition space with its own physical laws: an ‚otherspace‘ rather than a  “smaller version of the larger Heterotopia Museum“. In spelling out the relation of exhibition statement to its meaning-bearers, the individual works, the curator rightly retreats behind a differentiation of work and presentation.  His last sentences are the offer of an experience (in the sense of a movement between an observer and an observed) that Köhler hasn’t ultimately himself experienced – as he confesses abashedly, if you read closely between the lines in the exhibition statement.  However: it’s not an easy thing to constitute a “place with other rules“, and that thing which loses itself in the larger room amongst too much nuance provided by Static and Movements congeals in the two smaller rooms into an In Between; into something that, 2 in its detachment from the usual, from the familiar, lives up to its name – as none other than an ‚otherspace‘ [‚Andersort‘] that one can experience in the ‚in-between‘.