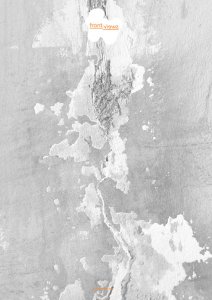 
»A Hairy Monkey«
A novice using the Illustrator program for one of her first times finally won’t sit proudly in front of some nicely decorated vector-graphics but, to her surprise, may find herself starring at some loose forms and colors spread over the screen rather arbitrarily instead.  If she is lucky, the result happens to please her as digital art. Eventually she will find an interesting path in her work onto which she can lead her creative ambitions.  Nevertheless, the artistic product only pretends extending into space, making use of 3D-techniques and Retina-Display. Still, it rests hidden behind the screen, intangible, settling for its own virtuality.

Cecilia Gimenez might have found herself with the same disappointment regarding the lack of presence in artistic work.  In 2011 the Spanish woman was bearing witness of her religious engagement when she herself took on full artistic responsibility restoring the fresco painting of Jesus Christ in the church of Borja. Gimenez considered the extent of decay the fresco had obviously been through for the more than hundred years of its existence as inappropriate with regard to its purpose, conferring a worldly presence to the son of god. Hence, the 80-year-old woman herself swung the brushes and revived Jesus Christ in the fresco painting as true to original as her artistic abilities would allow it. Following reports of BBC news, Gimenez thereby changed the Christ’s appearance into that of „A Hairy Monkey“. But this predication would misjudge what for her was at stake: the worldly presence of the absolute within artistic work.

Towards the presence of artistic work both artists, Alexandra Hopf and Emanuel Bernstone, are directing their creative processes. Each of them pursues the logic of the painting itself in their own way, aiming to professionalize the self-will of technique and material which the Illustrator novice faces rather unintentionally. Thus proceeds the creative story to a point where by interaction with the material and practices themselves the painting has gathered its own history. The actual imaginative content, present in the painting, contrasts with the artistic story it has to tell.

Alexandra Hopf processes what later appears to be the pictorial surface of the painting as a three-dimensional object. She produces multilayered textures within which the third dimension becomes part of the imaginative entity that finally supervenes on the painted object. Whereas we find a pattern stretching horizontally, this pattern combines to further abstract forms or schemes vertically. Sometimes elements of a painting group themselves into a figure-ground relation, sometimes one layer intervenes into another.

In the painted works of Emanuel Bernstone one meets with multiple layers of color. The artist designs this complexity of material when painting it over and over.  It is not only the three-dimensional artwork consisting of materials, textures, colors and forms that combine into its plasticity. The latter particularly appears in virtue of how colors relate and contrast with each other. The pictorial content emerges from the material body of the art object – a schematic scene or situation in which geometrical and abstract objects and figures seem to move on through space.