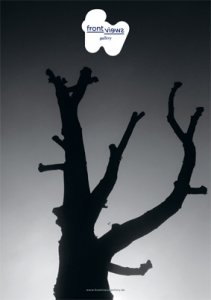 01.11.2010
The rooms of the frontviews gallery are cleared and empty, free volumes.
The artist duo BURGHARD will come in, bring objects, arrange and rearrange them, spatially and in time. Inside these, matters of both space and significance fast diffusing language systems of our western culture, BURGHARD are holding a distant enlightened attitude, establishing their form of language in a niche of culture. By the precise reduced and very conscious setting of single items, or combination of them, they weave a net of meaning in the exhibition space. The works, mostly single items of small groups, are removed from their daily use and thus transformed much more than they first appear to be. BURGHARD change these into bearers of new meaning in an understated poetic way. Those bearers are recognizable as signifiers, but in the new setting one misses the according signifieds. In this refusal the works revoke a fast consumption of sense and under run the well trained decoding-strategies of the conditioned art viewer. One is forced to back-pedal, in the head a pleasant emptiness is generated. The viewer is able to learn a new language, located somewhere between its origin and the artistic language of the duo.
The result is open.

This will the first solo show in the new gallery space. We are delighted, that BURGHARD will set the beginning.

BURGHARD
BURGHARD’s works insist on materiality. They draw away from symbolism and refuse to give the viewer a clear, definite message. The objects create an imaginary field, allowing gaps to be filled by the viewer.
The viewer commences in a dialogue with the work, which is perceived as contingent. Thus, he is engaging a collection of works, which provide neither answer on questions too long unanswered, nor a final product. The objects are immediate; current fragments of discourses, which are guided in a language without punctuation marks using a more palpable, resistant vocabulary. The work is transformed into components that assist the viewer to engage the discourses offered in the exhibition on a deeper level. Similar to words in a spoken language, the objects can be joined together. Depending on their connectivity, they evolve new meanings. The deciphering of the specific codes is aggravated through cross references between the objects, their caginess and their non-linearic, but more spatial expansion. The works correspond with each other through overlapping surfaces. Projections are blurred, distorted and uneven. Details are garbled and alienated. The visible reminds the viewer of the invisible, anyhow present. Immediately after entering the exhibition, the position of an independent, passive viewer is dissolved. He begins communicating in the open field with the objects, becomes part of the imaginary field and changes predetermined structures. It becomes possible for the viewer to create a uniquely individual path on which he can disappear and reappear on his own.
Lukas Juretko