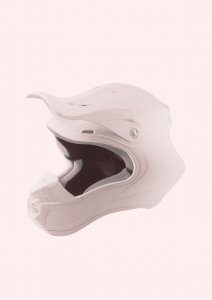 Through still, carefully displayed object compositions that offer a quasi-meditative space for reflecting on the relationship between humans and technology, artist Mit Borrás explores the ways in which the devices that surround us – suited to our work and leisure environments – alter our perception of time, both physically and psychologically. With his work included in the group exhibition Wasting Time, Vol. 1: The Nature Edition at Objekte Unserer Tage, Berlin this weekend, Julianne Cordray spoke with the artist about his sociological perspective on the objects, and behaviors, of the digital age.

Julianne Cordray: The relationship between progress and technology plays a major role in your work. Can you talk about your interest in these intertwined, though at times divergent, elements?

Mit Borrás: I’m interested in the nature-technology dichotomy and how we, as a society, have conflated the idea of progress with the idea of technological progress. Technological progress is just one form – there’s also intellectual and medical progress, for example. But nowadays, if you think about this word, it’s automatically related to the idea of technology. I started to read about this and found it interesting that most societies – especially the empires – had a very similar history to ours, and they disappeared precisely at the moment they reached their highest level of progress. It was at the moment when they had the most advanced technological knowledge that they collapsed – because they had consumed all natural resources. Because we are so smart and make these beautiful, sexy machines – like laptops and iPhones – Neo-capitalism sends us the message that we are reaching the future. But it’s a paradox, because this is also what is driving us to certain collapse. The farther we go in this direction, the farther we are from what is tangible, real and connected to nature. My theory is that science and art write the idea of what progress and future are for us, but the only thing that really confirms this idea is the tangible thing – the object. Design shows us what progress and the future look like. We see that, especially in the objects that we consume.


JC: In this context, what types of objects or materials do you find particularly engaging?

MB: What I find interesting is that most of the objects that give an impression of the futuristic are ergonomic and adapted. These objects are linked to the idea of us, as human beings, adapting to society’s expectations: being flexible at work, doing a lot of sport, being sexy, young and fresh. I realized that most of these ergonomic objects are related to work – as workstations, for instance. But they are also related to our free time – to wellness, fitness, etc. I found that connection interesting and wanted to develop a theory, through my sculptures, to show that. Progress is very beautiful and sexy, but there’s something twisted behind it. The philosopher Slavoj Zizek speaks about desire, which is something that has a lot to do with progress. We feel this desire because these objects and elements of Neo-capitalism are very sexy; there’s actually something sexual about them – they are soft and tender. And they somehow satisfy our feeling of future nostalgia. We want to reach this idea of the future, because we think we can escape, and technology and progress gives us the impression that we can.


JC: The exhibition at Objekte Unserer Tage is titled Wasting Time, in reference to how we, as a society, perceive time in our contemporary, technologically enhanced environment. How do you conceive of the concept of wasting time within the context of your own practice?

MB: From a sociological perspective, I‘m very interested in people who do sports. I always pay a lot of attention to how people waste their time; because I think it’s interesting how this relates to the way that we consume and how it is driven by society. So, I enjoy going to gyms – just to look at them – and I love to see people running, and to see that they have headphones and iPhones, and are always wearing these monochromatic things. I love that this is extremely far from what I understand to be wasting time. I think the border between working and wasting your time – leisure time – is really thin. We are told that it has to be thin, or almost nonexistent. So, wasting time involves hyper-connectivity. For example, I love the people that run and then share how many kilometers they ran, or how many calories they burned. To me, that’s already an art piece.
There was a particular experience a few years ago that really left an impression on me. I was driving on a highway and saw a man running. He was in a little forest surrounded by a fence in the middle of an industrial complex. It was obvious that someone had left it there as an excuse to touch a little bit of nature. The man running there was wearing an amazing fluorescent-colored suit and white headphones. I automatically assumed that this person thought he could somehow connect with his basic needs and waste his time, but it was all absolutely controlled: his phone in hand, talking, counting every measurement and then sharing it all on the internet. It did not seem like wasting time to me at all.


JC: Three of your sculptural installations are included in the show. Can you say a bit about them?

MB: My installations are usually built around the idea of the soft cave, and these works are part of that. In the past, the cave was the place where we felt secure. Now, our cave is our home, and it’s somehow also our workplace and recreational space. We are told that we have to be surrounded by ergonomic objects. These are the objects I build – they look like objects you want to be surrounded by.
One work, called Ergonomic Shape, consists of a stone laid over a sport element – a peanut ball. I always want these objects to look attractive and to be shown using some elements of how the industry displays things – as they should function in the way that Neo-capitalist consumer objects function. They should be attractive, but at the same time they should be a little bit paradoxical. In this case, the work speaks about the relation between natural elements, which have been controlled by a factory – as it’s not a stone found in nature, but one that has been mass produced – and plastic, artificial elements. There’s also a heavy object in relation to a very light, sexy and ergonomic object. Another work is also called Ergonomic Shape, and comprises a metal bar – bike handlebars – laid over a plastic, synthetic surface. It’s beautiful, sexy and ergonomic, but it is not usable. The subtext is that it’s adapted to us – it’s a metal bar that has been shaped in this specific way to fulfill our needs. The third piece is one of my most recent works. It’s a large piece of ceramic printed on one side with an image of the sky and laid over a yoga ball. Again it refers to the natural and the artificial, and also recalls the idea of wellness – of finding a balance between body and mind. At first they bring to mind things that are beautiful and kind, but when you think about it, they are not so friendly. The ceramic piece is shaped like a knife – it’s sharp. I enjoy building these objects that have a bit of black humor behind them.


JC: Since display is such an important aspect of your work, is there a specific location or mode that you would ideally like to use?

MB: I would love to make a huge installation in the Apple Store in Dubai. Also in a huge, futuristic gym.

MB: At the moment, I have 10 exhibitions confirmed for 2018. The next one is a solo show at Frontviews in Berlin – opening next month. Then, I have a solo show in Milan at Dimora Artica, and another exhibition at Daily Lazy in Athens. I’m also programming a few conferences.
I’ve been working on ergonomic sculptures using thermoplastic, because it’s a very artificial material that you can flex, and I’m combining that with sport elements, like balls, again. I’m also working a lot with video. My upcoming video is called ‘Venus Vapor’, which is going to be projected into a room with chromotherapy.  I’m going to fill the room with smoke and a specific color, called rose quartz, which is designed by pantone to promote relaxation. A synthetic voice will then tell a story created to make you feel even more relaxed.

all rights by Samizdat Online
http://www.samizdatonline.ro/mit-borras-interview