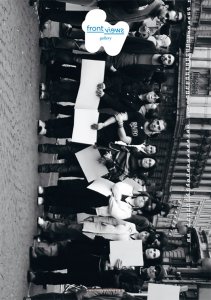 
Life runs down  -  routine comes in  -  service is managed  -   uneasiness creeps in, a personal one    -  utility goods at hand, furnishing routine  -  is not just used up....but deliberately “used into pieces“  -  the unexpected, the unforeseen, outbreak, turmoil, revolt !   -   But: energy and action for the final freeze, conservation!!!   (making it timeless, anti-turmoil, anti-revolt)  becomes an object of contemplation, a sample, just a reminder of commotion , a placeholder of revolt and turmoil, an outlet for the restless.   -   everyday life is  broken up, “played into pieces“, transformed, then tied up firmly   -   „play damage“ as daily operation, routine of the artist“ -  the concreting of the revolt: service of the art gallery.
Go on.

a catalogue of the exhibition will be released:

Stella Geppert’s artistic works are distinguished by a  phenomenon of the provisional as well as a visualization of the ephemeral. The work Parasitäre Verhältnisse und Dialoge (ParasiticRelationships and Dialogs),2002, is an artistic intervention in a public space, the platform of a Berlin underground station, touching on points of contact which occur between people and architecture, specifically where people linger, wait and lean. Specially produced  padding on columns and guard rails not only made these surfaces impalpably softer for travelling city dwellers, but they marked fleeting points of contact with the urban location. One often has the impression in the work of Stella Geppert that everything plays itself out on the edge of the spatial, as if the peripheral has crept into the centre and settled in. The interior has been turned inside out; inner processes are made visible through a sculptural intervention– an artistic principle that comes to light, for example in the installation Unabhängig von der Lage [Regardless of the Situation] 2009, in which the artist shifted the basic spatial parameters of the Cuxhaven Kunstverein through cuts into space and interventions thereby extending architectural constellations.

Furthermore in the works of Stella Geppert the intention of spatial uncertainty is always remarkable: from the work Entfestigung [De-fortifying] 1998, in which the entire length of a house on the marketplace of Wittenberg gave the impression of being filled with one single bright red cushion, seemingly swelling out of a house from all open windows to the installation Are you there?, 2007, where a spatial intervention with mirrors and wooden slats in the Künstlerhaus Bremen reactivated the former provisional interim nature of what was formerly a mattress warehouse. The perception of spatial uncertainty and instability arises in connection with her current work When Destruction Becomes New Form, 2011, which like many previous art projects can be understood as a series: twelve black-edged objects are presented on tall shelves, and form a strong contrast to the white boards covering the walls and floor. What appears at first glance to be miniature flying objects or utopian architectural models, turn out, on closer inspection, to be shattered, improvised, bonded conglomerates that possess here an unwieldy arm or there a bulky protuberance. These sharp-edged objects are supported by different structures, all of which are equally grotesque in their provisional composition and contribute to an apparently functionless functionality.

Provisional (from the Latin for "provisio", provision) means a system established for a temporary purpose, a transitional aid, usually being a temporary restriction of use which is determined from the outset. In the case of When Destruction Becomes New Form the provisional is the programme and is designed to be a staged game of stability versus instability.

The absurd level of staged provisionality is made especially clear through rhetoric: an object resting on a white metal shelf, which in turn is supported by plywood, stands on a wooden structure, which is connected to an inverted table, which by means of the improvised use of tape is fixed to thin wooden slats. Elsewhere, four long wooden boards are fixed to four thin black metal legs of a black plastic stool with plastic ties, instead of a seat. This tower-like structure is topped by a black object, which resembles a tentacle-like animal. This is not as much an object grammar, as an object syntax: there is a stool that is not used as a stool, but is used as an extension of a rod, which serves not as a rod, but proves to be an extension of the bracket and finally merges with the surface of the base – board, shelf, glass top. The material aesthetic targets ordinary, unused office furniture.

Last but not least, there are those twelve black objects which through the context of their material aesthetic refer specifically to an orderly and bureaucratic space: the black objects are constructed from letter trays – mass-produced consumer goods, produced with the intention of facilitating a bureaucratic system of order. The size is made for the A4 format, which was set by the German Institute for Standardization (DIN) in 1922 as a standard paper size and which today determines, indeed manipulates, our thinking, designing and writing irrevocably.

If we think of object and space as one, then the theory of geometric space at this point is a productive motivation: not only does the geometric space present a seamless continuum, it works – according to Descartes – against all that is random, chaotic and unregulated.[1] Additionally, geometry presents humanity with two spatial layers, "the engineered surface of the world" and the "formal interior, which is quantifiable.”[2] To apply the influence of geometric space on human life, "incidents are truncated, processes are interrupted [...] and events are tailored to data and facts."[3] Whether we start from the phenomenon of geometric space which the Japanese philosopher RyÅsuke ÅŒhashirefers to as a literal "averageness" in today's modern era, is another question.[4] The considerations noted above about geometric space, however, could be fundamental for the artistic use of standardized paper sizes and standardized office furniture such as the letter trays, as they aim at a standardization of human action space.

The creative act of the destruction of those mass-produced letter trays in the series When Destruction Becomes New Form can not only be understood as an ironic response to the aestheticisation of manufactured goods – this work looks almost like a liberating jab at the epicentre of all things serial. The liberation of the object by the subversive reversal of its usefulness also brings along the visualization of an action itself: The black letter trays have been treated in different ways: folded, thrown, crushed, kicked, jumped on, hammered. The deconstruction and decontextualisation of that which conforms, salvages a productive instability so that the works of Stella Geppert usually generate a questioning of institutional space. Thus, the artist, in the present work, provides a new proof of her artistic intent – "to find and develop ways of representing communication."[5]

Put Away, Install, Display: Situate and Put in Place

In this spatial work StellaGeppert also creates consciously unstable structures that are in opposition to an institutionally inherent rigidity: "From my very nature I am a hacker," she explains, "when I'm actually in a space, I go after the respective spatial and social fabric and reflect on how to bring out the space’s inherent structures in an invisible way.”[6]

The architectural intervention goes hand in hand with the provisionality of the objects in the gallery space. The addition of new wall and floor slabs, which were originally used for an exhibition booth of a Berlin art fair, makes the architectural structure of the exhibition space a central theme. This turns the internal structural characteristics of the space inside out setting up a debate about the paradox of the long discussed white cube. In this regard, the title When Destruction Becomes New Form can be understood as a critical impulse with an historical reference to the famous exhibition "Live in Your Head: When Attitudes Become Form" which took place in the Kunsthalle Bern in 1969 and was organised by the Swiss curator Harald Szeemann. It brought about the development of new curatorial forms: a large number of artistic works in this exhibition, which was significantly subtitled "Works - Concepts - Processes - Situations - Information", were deliberately created by the artists in situ and in relation to the (exhibition) space.

The German word “verorten”is equivalent to the English "to situate", closely related to the word "situation", and it is not irrelevant to the artistic practice of Stella Geppert: she creates situations through the transformation of old forms and their change into new ones. As the artist discovers both space in the object and a sculptural potency in space, the following statement is quite apt: "I consider space as something that is constantly on the move and that is re-configuring itself. Also when I work concretely with it, I examine it outward from its physical materiality."[7]

The unexpected mise-en-scène of once functional, now destroyed objects on improvised pedestals that makes up the series When Destruction Becomes New Form refers, ultimately, to the widely debated topic of exhibiting. Put away, install, display – the whitecube in the series When Destruction Becomes New Form, doubling the space with its construction of new walls and floors, therefore seems to lead into the void while subjecting the classical pedestal to an ironic mockery.

[5]Stella Geppert, in coversation with the author, Berlin, in January, 2011