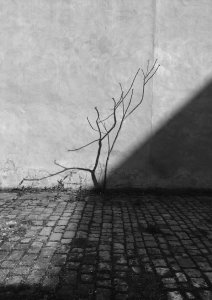 See the interview with Despina Flessa.

DESPINA FLESSA
An archaeological field has opened up on the ground. Bone fragments form the skeleton of an unknown creature. On the other hand, the elements remind us of stylized floral forms as they can be found in several variations in heraldic figures since the Middle Ages. They could also be natural casts that have made it from a past time to the present.
In fact, the supposed findings are modelled on a Paleolithic fossil found in the Peloponnese, a Greek peninsula in the south of the mainland. The artist Despina Flessa (*1986, Athens) did not take the segments of her sculpture Liquid Bones (2019) from the original, but reconstructed them from unfired clay and covered them with several layers of graphite. The result is this pure, smooth surface, which resembles a metal casting.
Graphite is the central component of Flessa's artistic approach, which usually oscillates between drawing, collage and sculpture. In Fold (2020) the mineral also determines the perception of the work. Like a very thin and at the same time massive steel plate, which is bent towards the middle at the upper two corners and rolled up at the lower side, Fold hangs, defying its apparent weight, almost floating on the wall. The fact that it is a work of paper remains completely hidden from the viewers. The metallic, dark-silver surface, which is the result of a multiple coating of graphite, obscures the paper ground and thus visually transforms the used material into another. This is exactly what Despina Flessa is interested in: she apparently tests and transcends material boundaries by working entirely with the properties of the same.
Besides the materiality of the materials, figurative elements can also become actors. In The Field (2017), Flessa shows how the depicted in the pictorial space is transferred to the outside through the shape of the material, thus creating a holistic illusion. At first glance, the vertically three-part work appears to be birch bark. At second glance, the upper third even reveals the shape of numerous trees, which seem to merge into one another as if bathed in clouds of fog. Below the forest that is depicted, there follow arbitrarily arranged, hatched surfaces that, taken as a whole, produce the same structure as is found on birch trees. The three stripes each finish in monochrome dark grey ends, which curl up at the corners as if the bark had detached from the tree at this point, thus completing the illusion and the interplay of motif and technique (monotype and graphite on paper).
The oeuvre of the artist is diverse. Repeatedly, Despina Flessa combines monochrome surfaces, figurations, graphic gestures and the material which operates with the space, thus creating a new understanding of material entities which the viewer can experience individually.


THORSTEN ALEXANDER KASPER
Thorsten Alexander Kasper (Hamburg, 1970) is a painter based in Berlin. After studying in the School of Graphics and Design in Hamburg, he assisted Prof. Gerhard Vormwald in Paris until 1990. Since the year 2000 he has been based in Berlin. Participating in numerous exhibitions since the early 90s, he is today an active member of the collective Frontviews. Combining egg tempera, oil paint and a delicate carving/scratching technique on his paintings, the artist expresses through colour and composition abstract emotions that then engage with the carved figures. The evocative landscapes invite to discuss their deeper meanings, a closer look that will uncover the detail within the figures. Joining abstract forms and figuration in different degrees of delicacy proposes a closer look into the work on itself. He encourages you to step near and look more carefully -  an invitation to a dive inside the artwork. There are two moments during the observation of his paintings. The colours attract us to the canvas while is the aspiration of sensing the figures that traps us longer within the art pieces.

The abstraction in the paintings works both as an expression of the artist himself and as a door to analysis. As figuration sometimes gives away too much information that determines the reading of an artwork, the artist aims to create on his own canvas a territory where the ambiguity plays this important role. The capacity of recognising these forms is inherently human, and the expression of the artist gives the option to the viewer to interpret these feelings. On the canvas, the artist adds a singular perspective but again, leaves open the door to this translation from form and colour to emotion.

The process at the end is that of painting and carving, adding and taking away, reinterpretation of the artwork, rework of the art piece. As long as the idea is still on canvas it can be worked on and on. The notion is still there while the expression of the artist changes. He is looking for the essence of art within his own art. Direction is open - liberty is found on the lack of restrictions. His approach detaches him from confinement, the art develops and the artist follows, thus creating space for continuous investigation, for developing forward through art.

STELIOS KARAMANOLIS
When looking at Stelios Karamanolis‘ works we find ourselves wandering through deserted valleys, passing by skinny smoke signs, proliferus plants or colourful clouds.Besides a sink or a chimney one finds very little traces of mankind. Instead of humans, chatty, funny or inquisitive looking creatures populate the artists‘ canvases. Like picture puzzles, their expressions shimmer depending on the position of the observer. Thus, every day objects become magical vibrant creatures.

Painted often with pastel colours Stelios Karamanolis‘ works evoke a dreamy, cloudy atmosphere. If one doesn‘t know whether we are trespassing a post apocalyptic utopian landscape the mostly friendly looking beasts make sure there is no need to be worried. Maybe there have been human beings before, but they are long gone. Now, what one gets to see might be some leftovers of modern life. Memories of the past like old stones from ancient times.