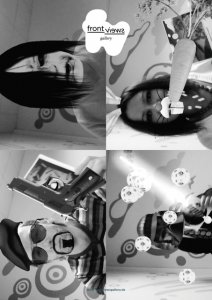 In matters of an increasing regulation of our lives caused by digital systems, the production of pictures, too, is more and more independently generated by computer programs. These new aesthetics are not based on formal decisions by humans anymore, but on mathematic processes of  executing programs. Simulating existing reality only in parts, these programs have the tendency to produce completely new virtual prototypes of aesthetics. Man may have developed the programs or may be able to choose some parameters, nonetheless is he gradually deprived of controlling the actual production of pictures, the mashine produces ist own and visually unique imagery. This kind of outsourcing the creative, conscious acting to categories of algorithm is a development, which Frank Eickhoff not only attests but uses for the contention of his work. He focusses on the interfaces between individual and generalized ways of production, such as analog / digital, material / virtual and handmade / computer- generated. Thereby he  diversifies the relations and interactions in relation to the whole of his photographs and sculptures in an open and concentrated way. Including diverse references to our cultural memory, the generated virtualisation of shape and colour by the support of programmed lights, the standards of daily photo laboratories and the complete analogue use of the „handmade“, excresent constellations of relevances, significations and formal presence are created. His body of work may be best set in relating to these four constituents:
1. the selected acess to cultural memory
2. the development of an own expression in form
3. the commitment to virtual strategies
4. and the form finding in real material as representation of nature.
Thus in changing combinations when realising the pieces of art high dynamism and complexity are originated, a reference to the increasing virtualisation of postmodernism today: folktale hits Simulacrum hits augmented reality hits wood hits references of art history hits megaposter hits Avatar hits virtual systems hits dancefloor hits visitors of the gallery. This diffusion of „anything goes and is extra for free“- of our actual times is canalized and solified by Frank Eickhoff in order to develop aestheticallly seductive and rationally profound works.

Frank Eickhof has finished his studies at the Staatlichen Hochschule für Gestaltung und Medienkunst Karlsruhe in the class of  Ulay and has also taken theoretical studies in the class of Boris Groys and Peter Sloterdijk. He lives and works in Berlin.

“Don’t guess when you can test”
Q-Lab

Everything flows. In the North Pacific Gyre the detritus of plastic products accumulates to form a gigantic carpet of plastic debris from the leftovers of our visual environment: polypropylene, polyvinyl chloride, polystyrene. Paint, rubber, styrofoam. The rubbish swirls round in an enormous circle at the rate of eleven centimetres per second. The objects are broken down once more into tiny particles, as if they were being ground in an oversized mill. The artificial meets the natural, and natural movement meets product life cycle.

All that plastic has previously been churned out en masse by machines, yet the razor blades, digital cameras, lighters and plastic bottles are effectively worthless. Only the information about them – the programmes stored in the machines – is valuable. Algorithms keep the world moving. Data, information, images and signs all circulate the globe in a colossal digital torrent. Not only the current price of crude oil and variations on currency exchanges, but also Goethe and Surrealism are translated within milliseconds into light impulses which flow in a constant stream through electronic channels. The maelstrom of data that is the Internet uses algorithms to pulverise everything into the finest particles: bits and bites. The speed of the medium alone significantly increases the amounts in circulation, with an upper limit of 300,000 metres per second – the speed of light.

Yet the speed and sophistication with which digital cameras and computers generate images is irrelevant, for the information is transmitted on paper made from the synthetic material polyethylene, or polythene, often abbreviated to PE. Photographic paper, based on crude oil, can be wiped down or folded, in fact it is virtually indestructible. A million years in exchange for a single moment. Fossil time versus the synchronised virtual present time. Algorithm plus crude oil equals virtual space: that is the formula for the dialectic of informational capitalism.

The technically reproducible photographic image has been integrated into an industrial network right from its very innovation. Photography and numerous related technologies for industrialising the process of taking pictures have had a greater social and cultural influence than any other mass-produced object. Following the invention of the photograph it became not only a central component of the consumer goods industry, but an entity in its own right, in a new domain where signs and pictures which essentially no longer had a point of reference could circulate and be reproduced.

In the digital trade winds of informational capitalism the artist is analogous to the lonely protagonist in Daniel Defoe’s novel Robinson Crusoe. Stranded on an island, forced to fend for himself, he produces his own self-referential reality. Paint, styrofoam, metal, and sellotape are the elementary building blocks of our architectural reality from the DIY store round the corner – cheap materials plus high-tech equals reality. The flotsam and jetsam of our visual environment from the damaged shipwreck of reality, from which the stranded person can rescue those items necessary for his henceforth autopoietic, self-referential existence. What if everything flows? What remains: preserve the form.

Formalisation refers to the calculation or acuity with which a person can make intellectual use of his environment, the natural world and the universe. The first step is to differentiate amongst the undifferentiated. First Robinson Crusoe builds a small stronghold for himself with the remains of the capsized ship. He marks an initial boundary between himself and his surroundings. Me Robinson – you Friday. To label is to differentiate. He creates a whole world from this. After all, you have to be able to distinguish the weather from a bread roll.

It is no different in art. A plane must be distinguished from a line, similarly colour from form, wood from metal, the composition from the motif, and last but not least, the frame from the picture. A work of art asserts itself by documenting how it copes in the face of circumstances it cannot control. That implies an understanding of form which no longer requires the Aristotelian antithesis of matter or the romantic antithesis of content. Such things are created from within, on the brink of indifference – only the observer is needed, the island inhabitant who makes that first differentiation. The form of a work of art no longer consists of the way it has been put together, but of the differentiation between its discernible components.

All the rest is carried out by the computer which executes the calculations. It is completely irrelevant whether a formal operation – the calculation – produces a picture of Giorgio de Chirico or a diagonal line. The result is open. But no thing – no problem. It’s all a matter of observation and agreement. For the things have long since bid farewell one way or the other. The “non-thing” recovered from abstraction as distance to the world is what we used to call form. These days our surroundings are already increasingly characterised and marked by “non-things”, by information; in the information era the concrete aspect of our lives is no longer composed of objects. There is a suspicion that information, rather than a thing, is economically and socially concrete.

So is it nothing that appears? Is it all a simulacrum? And the chimera has already absorbed its opposite number – reality – just like the fable of Reynard the cunning fox. Only one truth remains for us when we become aware of the simulation: the lie always floats to the top.

When seen in this light, what mostly seems to be a computer-generated collage is no less than the bare reality. Only sometimes – sometimes it is impossible to predict whether the machine reality will end its calculations or get caught in an infinite loop, a paradox, a vortex. What if nothing works any more? Then the observer must pull out the plug, wait a while, and restart.