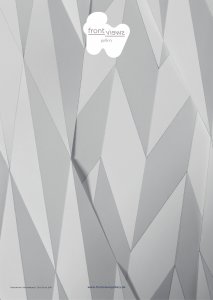 After a series of exhibitions establishing their relevance on the conditions of a â€žsocial-culturalâ€œ space, frontviews gallery is now introducing an impact on architectural space with the work of Sinta Werner. The artist investigates a basic dualism, the relation between space and picture and the level of truth, where one component is acting as a go-between. A certain possibility of illusion can occur in the transition zones in between space and picture or can be generated intentionally. For instance the artist installs a kind of a â€žfake-architectureâ€œ in real space, which forces from a certain position the imagination of reflections, turnings or doublings of the given structure. This fixed point of view corresponds to the fixation of a picture; if however the viewer moves around, the illusion declines and the â€žparasite-architectureâ€œ is notable. Compared to other artists, like Felice Varini or Georges Rousse, who are only accepting the finished photo as a relevant reference of this mixed reality between given space and intervention, Sinta Werner offers an immediate experience of the illusionistic interventions to the viewer.Â

In the frontviews exhibition â€žAbschattungenâ€œ the artist shows a new body of works including objects, series of collages and paper foldings. The thematical approach comes from the picture, which composition and surface is broken off, cut and rearranged in another way. Not the space is fused to an illusionistic view, but the picture is fragmented and released to the likelihood of the space. In this way the created works are shifting between relief, collage and sculpture; also here illusion and mixed perspectives are waiting in the niches of transformation. Therefore new strategies of reception are necessary. According to the space interventions a more intensive use of the body in sense of viewing and moving is presupposed. As pointed out by Merleau Ponty the breaks and multiply views develop a more comprehensive reception and a mental fusion inside the viewer. They are establishing another degree of reality.

The team of frontviews gallery is pleased to be able to present this selected overview on this new part of the artistâ€™s oeuvre and gives a warm welcome to all who are interested.

- How does the past inform your work?
I am interested in the concept of Renaissance perspective, the Albertian window and the camera obscura.
- What interests you about the tradition of illusionistic painting?
In the tradition of illusionistic painting the method of perspectival construction stood for an ideology founded on an idea of truth derived from rationality. Man in the Enlightenment positioned the rational being in the center of the universe. The centered position of a viewer in front of a Renaissance painting represented man's domination over nature and his desire to explain, measure and control the world.
In my installations I'm interested in creating a fixed standing point from which the illusion of a mirror is evoked. After leaving this standing point the installation falls out of place and becomes fragmented. The centered position is displaced in the process of approaching the artwork. The centred subject of the Enlightenment is replaced by the postmodern subject. There are no longer any fixed vantage points to experience the world, but rather a multiplicity of possible positions existing simultaneously.
- Would you describe yourself as a trickster?
The creation of an illusion is an important part of my work, but it is also necessary that the illusion reveals itself. Disillusionment and deconstruction are as important to me as the illusion. In an illusionistic painting one creates the impression of depth on a plane. In my architectonic installations I'm creating the illusion of a flat plane - that of a mirror in space. I want to reverse the relationship between the illusion of two and three-dimensions.
- In what sense does your work question the exhibition as architectural space?
I don't want to bring an art object to the pure white cube exhibition space. I want to break the borders between the art object and the surrounding container of it. I also want to break the borders between the notion of a flat image, a sculpture and architecture.
- Can you explain your interest in theater?
I would consider my work theatrical through the way that the spectator becomes part of the work and completes it with their imagination and movement in space. The installations have much in common with stage sets in the way they are constructed. Like stage sets they work in a similar way as a painting because they only have to function from a distance and from one side in order to maintain the illusion. There is always a front and a back allowing for the possibility of stepping behind the scenes. The choice of materials is also influenced by theatre - the materials do not have to function like proper architecture but only as a facade. The installations have the character of a model, but a model you can step into.
- You have a nomadic attitude to genre, working in painting, sculpture, architecture and installation. Are movement and travel important to you?
I need to work in different mediums because my work is in between two and three dimensions - the process of making relies on a dialogue between the two. The architectonic installations deal with a similar set of problems as the objects and photocollages, e.g. playing with the sightlines of the viewer, skewed and unreliable perspective, and an impossible or non-functioning interior. Â
Travelling is not a neccessary part of my working practice. Sometimes it opens the eyes to be in a foreign city, especially how you perceive the urban environment and architecture. Travelling for me is rather a nice perk, as I make site-specific works and need to build the piece in situ. I enjoy very much spending time at the exhibition space in a unfamiliar environment as I always find new influences and encounters.
- We live in a world where our experience of reality has been vastly accelerated by technology. Does this inform your practice?
I want the viewer to become aware of his own perception of space and his own movement in space. The emphasis is on slowness rather than acceleration.
- What next?
In September I have a solo show at Nettie Horn in London. I am planning to build a materialized double exposure in the gallery space. The project will address how new technology like photoshop influences our way of seeing and filtering the world. I want to dematerialize the space with the material object.
- What are your top 5 trompe l'oeil artworks and why?
Although I would be hesitant to categorize the work as 'trompe l'oeil', I do like a lot Jan Dibbets' 'Perspective Corrections'. In these works, Jan Dibbets questions the still predominant notion of truthfulness in photography â€“ the notion that photography depicts the world without interpretation. His interest lies in photography per se, in an analysis of the qualities that constitute the medium â€“ such as the rectangular shape of the photograph, the monofocality of the camera eye and the laws of one-point perspective.
A few other artworks I enjoy (in no particular order):
- Ariel Schlesinger 'Netally and I'Â  Two mysterially curved Pencils. I like the playfulness and surrealism that inhabits his works.
- I also enjoy work that involves anamorphosis like that of Georges Rousse, Joseph Friedrich Leopold, and Markus Raetz
- Then I was very impressed to see San Satiro Church in Milan which is not an artwork but architecture. The church has been modified by Bramante who foreshortened the perspective of the apse to make it appear much deeper than it is.
Â