»Forth under, skip down« 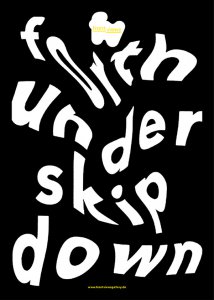 »Forth under – skip down«

September 2010: The view into the Editorial Office of TAZ across the street. Two houses standing quite close opposite of each other. Beneath a huge amount of vehicles and pedestrians are passing by. Right across offices, in between heavy traffic…the atmosphere almost being reminiscent of New York. Big window front here, big window front directly opposite, making phone calls in front of traffic noise, filtered by glass.

June 2011: Still the same view, but everything much quieter and in the meantime the walls have been painted in a light grey. The Biennale of Venice was good at the time. We had already organized some exhibitions in the space, but now we are coming definitely to an end here.

March 2012: Almost immediately afterwards people suggest to carry on. A group had found itself and about six month later we cross out the “gallery” in the name and found frontviews in a new way, as a collective of artists and theorists.

September 2013:  During a further group exhibition Stella Geppert shows a mirror in which the field of vision is a circle-round whole into the exterior environment. If someone looks through, they don’t see their own face but a cut-out of Giatrakou Street in Athens, the place where we exhibit.

March 2015: Now: the view of the eastern blocks across the wide pavement, the broad lane…Moscow and Warsaw are probably like that, somehow, in vast parts. “Tile” once seemed to have been more controversial. After three years everybody is coming together here – including some new ones- to exhibit jointly for the first time. We are linked more by a common praxis, then by a certain artistic style. We know each other longer by now, have held regular meetings, exchanged and shared views and worked together several times. As for the “siting” in art ideas are meeting on formal and conceptual bases. And last not least, what also becomes obvious after three years is, that there is a sustaining and supporting culture of our group, laying underneath all activities.