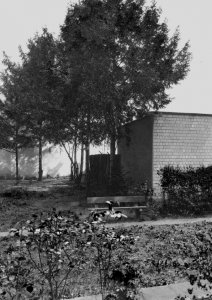 An exhibition in addition to EDITION #5
organised by Harald F. Theiss, curator.

N a d j a B o u r n o n v i l l e authors biographical narratives told through a restaging of events. Her new and enigmatic constructs seek to connect contemporary history with the present, rendering the true story invisible.  For Bournonville, it is not about how something was, but rather about the imagination, and how a narrative is set in motion. In this way, other potentials are created as ones relationship to reality is questioned. Using fragments of memory and trace, Bournonvilles surreal pictorial forms find a new space for time and events in which the distance to them seems to have been removed, yet still allows the viewer access to witness an unexplained yet familiar phenomenon.

"A photographer is always also a witness, spy and creator of alternative realities. The camera, whether analogue or digital, has only limited possibilities to tell a "real" story, but it can step in and take the place of memory". (Nadja Bournonville)

it becomes small and insignificant is part of her 2018 series intercepted, which was exhibited at the Triennale in Hamburg 2018 as a result of her recommended fellowship in cooperation with Haus der Photographie at Deichtorhallen Hamburg, Fotografie Forum Frankfurt and Foam Fotografiemuseum Amsterdam. A publication has been published by Fotohof edition Salzburg. For Bournonville, art books form an independent oeuvre within her artistic practice. With the motif of the hand, the artist constructs a mysterious gesture. She refers to an initially imaginary writing activity of still unwritten information. It is the indelible traces in life that Nadja Bournonville reminds us of with her camera. She uses the motif to retell the incredible story of her relative Eva de Bournonville, who out of a sense of adventure became a spy in London for a short time during World War I. She was arrested after only twelve postcards written with secret ink...

Bournonville has made a special and limited edition available for Frontviews for our annual edition #5.


N a d j a B o u r n o n v i l l e is a Swedish photographic artist born in 1983 in Vimmbery. She studied fine art photography at the Glasgow School of Art and photography at the Hochschule für Grafik und Buchkunst in Leipzig. She was twice a scholarship holder of the Stiftung Kunstfonds and participated in the project gute aussichten — junge deutsche fotografie. Her work has been shown in countless international exhibitions, including Akademie der Künste, Fotografie Forum Frankfurt, Deichtorhallen Haus der Fotografie Hamburg, Fotohof Salzburg and Bonniers Konsthall Stockholm. Since 2008 the artist is represented by Pierogi New York. Nadja Bournonville lives and works in Berlin.


C a r s t e n B e c k e r s’ photographic works tend to question, how does history affect the present? His series are often developed from historic material and reflect upon the importance of generating an understanding of how public opinions and perceptions of events are shaped and formed. In thus he addresses the influence of images within the mass media, as he pays attention to the potential for distorting and shaping expressions of reality by ways of manipulation.

With photo-artistic means Becker not only opens up a new space for interpretation, but he also questions the demands and expectations of the depicting medium, this can be witnessed in his new series of iconographically charged compositions of seemingly familiar objects. After an initial examination of the unusual and mysterious-looking composition of functional everyday objects, the questioning of the interpretation and meaning of the sculpturally staged objects with their unusual and strikingly pale colours follows. Carsten Becker's sober variants of still life motifs are reduced developing a speculative narrative over the dull surface of the familiar objects, its materiality, affiliations and the artistic medium itself. His combinations of DIN standards with RAL colours become thinking tasks. They are not reminiscent of the history of standardisation, industrial and product design, but rather refer to contemporary historical and socio-political contexts.

As a limited edition Carsten Becker has created Vichyform mit Kugelknopf, 2020, for the current edition exhibition #5 in Frontviews at HAUNT.


T o b i a s K a p p e l ’s  extended photographic practice repeatedly tests the causal and physical translation processes embeded in and beyond images. His use of multimedial photography generates new and infinite possibilities for the image as he reinterprets our perception of the here and now. By reworking photo material through abstracting, enlarging, cropping, and reproducing details Kappel extrapolates divergent forms of information and juxtaposes them with unexpected new perspectives. For example, I see love, 2017/2020 is a digital image reworked in Photoshop. By using a deliberately low resolution, a first abstraction of the motif occurs as he shoots with an early digital camera. At the same time, the very small file becomes a digital canvas for the pictures' new ground. Comparable to painting techniques, Kappel develops the image using pixels as digital tools and shifts our perception of the image so that the categorization of the artistic medium is questioned and can no longer be clearly assigned. I see love is part of the series in-between (2013 ongoing), in which Kappel deals with the contemporary feeling of being 'in between’  and is interested in a discourse about images that have lost their certainty.

T o b i a s K a p p e l  was born in Potsdam in 1987 and studied visual communication with a focus on multimedia photography and technical imaging at the Muthesius Academy of Art in Kiel. His works have received several awards, including from the German Society for Photography, and have been shown at C/O Berlin.


S t e f a n i a S e u f e r t s mostly abstract photographic imagery is often concerned with aesthetic signs and possible interpretations of artistically conceptual action sequences that explore the connection and relationship between visibility and reality.  While appearing ephemeral, the photographic abstractions seem to be an attempt to capture sensibility and fluid states. In object-like images, the artist questions the representability of reality and finds moments of the coincidental or even the unpredictable. With pictorial appearances, she refers to shifts within the photographic medium. Her photograms are aesthetic allusions to the imaginable likeness of things surrounding us. Often a clear objective classification is no longer recognisable. Rather, the forms seem to change in the superposition of colored shadows in the light or even dissolve in favour of an uncontrolled (photographic) process of creation. So the boundaries of the photographic are removed allowing the medium to be expanded and viewed in a new way.

blind (magenta — green #1), 2011, is an experiment with light in which traces reflect time sequences and make them visible as sculptural abstractions on the photographic paper. The results are rather pictorial spaces and not images of clearly identifiable objects. The work is published in the second collaboration with Edition Camera Austria under the title Woods Survives in the Form of Postholes.

Stefanie Seufert has now made it available as a limited special edition for the exhibition Edition #5 in Frontviews at HAUNT.

S t e f a n i e S e u f e r t was born in Göttingen in 1969. She studied at the Lette Verein and at the Berlin University of the Arts. Her work has been shown in the following institutions, among others: Berlinische Galerie, DZ Bank Kunstsammlung Frankfurt, Art Library at the Museum of Photography Berlin, Künstlerhaus Bethanien, Berlin, NRW-Forum Düsseldorf, Kunsthalle Darmstadt, CPAP Havana, Cuba, Camera Austria, Graz, Fotogalerie Wien. Stefanie Seufert lives and works in Berlin.