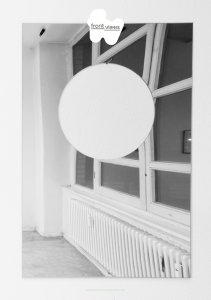 »Slide Show« is a collaborative exhibit connecting two cities through technology, media, time, and space. In Berlin, a show will be produced consisting of 11 contemporary artists. The show, constructed in a white cube space, will have no formal opening, but will be documented through photographs; these photographs will then be turned into slides. On May 22nd the slide documentation of the original show will be formally exhibited through projection in the white cube space in Berlin, while simultaneously being streamed to the public space opening in Athens. For the duration of the Athens exhibit, the original live stream will be played as a recording in the public space, while the original art show slides will be on display in the private Athens space for visitors to witness first hand.

Coordination and curation of »Slide Show« will be a collaborative effort among all participating frontviews members. Two members will travel to Athens in order to assure both the public space exhibit, and the show in the private space, are executed accordingly. This project aims to question notions of the traditional art exhibition by figuratively and literally projecting a non-traditional idea in a traditional space; »Slide Show« will focus on shifting perceptions though technology.

Aligning with all elements of »Hosted in Athens«, »Slide Show« is a collaborative work, transcending paradigms of the conventional »art show«. Ideas of interaction manifest themselves in the various facets of this exhibit; »Slide Show« enables internal and external exchange between, cities, collectives, and cultures.


more information about the artists